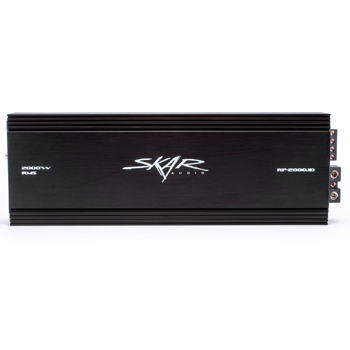 Skar audio is one of the go-to brands in car audio equipment such as amplifiers, subwoofers, and speakers. This is because of the company’s reputation of high-quality engineering. Products from Skar Audio rarely disappoint especially in delivering top-of-the-class sound and efficiency at an unbeatable price. This article is a Skar audio review focusing on the Skar Audio RP-2000.1D amplifier.

Skar Audio has several Monoblock amplifiers in the RP flagship line. The Skar Audio RP-2000.1D is the most powerful in the lineup. Weighing approximately 12 pounds and measuring 24 x 3.2 x 7 inches, the RP-2000 is designed for maximum power, efficiency and affordability. Although rated at 2000 watts RMS power at 1 ohm, this amplifier is capable of delivering a maximum of 2800 watts at 1 ohm. In addition, it has a high-speed MOSFET power supply and a four-way protection circuitry. The RP-2000 also features a Printed Circuit Board (PCB) design among other high-quality internal components. As if that is not enough, this amp also comes with a remote subwoofer level control and bass knob. This allows the user full control over their bass from the front of the vehicle.

The RP-2000 is arguably the most robust and reliable amplifier in its class. This amp effortlessly powers a single subwoofer of 2000watts RMS or a pair of speakers around 100watts RMS each. Also, the sound is amazing allowing the listener to get every bit of the sound without distortion. According to one of the Skar Audio amp reviews, this product is well-priced. As a result, it is one of the most sought-after amplifiers for a broad range of sound system enthusiasts. Other than the incredible power and reliability, the RP-2000 also promises a great deal of durable performance. A Skar Audio amp review applauds the amp’s ability to last so long.

The only disadvantage of the RP-2000 is the fact that it overheats when switched to 2-ohm operating load. This overheating comes about due to instability. The scary burn-smell interrupts your fun because you will need to turn it off to cool down the thermal heat. Other Skar Audio amp reviews expressed concerns over the inoperability of the amp once it enters protection mode.

This amp is the best choice for obvious reasons. With affordability, efficiency and excellent quality on the table; what more could you possibly ask? Except for the overheating issue and the inoperability while in protection mode, the RP-2000 is actually a high-end amp that is worthy of a 5-star rating. The longevity of service gives you value for your money.